Susan Hodgetts graduated from Goldsmiths College in 2011 with a Masters’ Degree in Writing for Performance. Her plays include Family Ties (Network Theatre, London); Slash, a play for teenagers (Young Actors Theatre, RADA); The Sky at Night (adapted for radio by the Lorgean Theatre, Romania) and an adaptation of The Ages of Mankind from Ovid’s Metamorphoses, staged at Brixton Market. She has also had work performed at Theatre503 in Battersea, Sydenham Arts Festival and the Short Story Studio in Brighton. Susan is currently writing a short play for teenagers for the New Theatre Royal in Portsmouth, to be given a public reading during Portsmouth Bookfest in October. She has also recently graduated from the Faber Academy Writing a Novel course and is working on her first novel.

Susan enjoys the challenge of writing for a wide variety of mediums and audiences, and in the spare time she has enjoys fringe theatre, travel, good food and good company, and her piano. 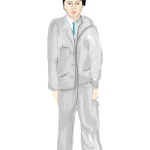 Prisoners of the Truth

Darren and Angie meet in a nightclub; flirting leads to showing off and dabbling in fantasy.